The ultimate murder game to play together as a detective!

Which one of your group is the killer in this murder game? Prove that you have the DNA of a real detective. Gather evidence and solve the murder. By playing a murder game, you're all trying to find the killer who is among you.

Each player gets a role in this murder game 'Murder at the Mafia' and they get a little bit of information that they have to share proactively or reactively when asked for. Each role has its own character, so there are plenty of rather funny or strange personalities mixed together. Hilarious sometimes, but meanwhile of course a very serious issue. Because .. there is a killer among you! Good luck finding him of her. 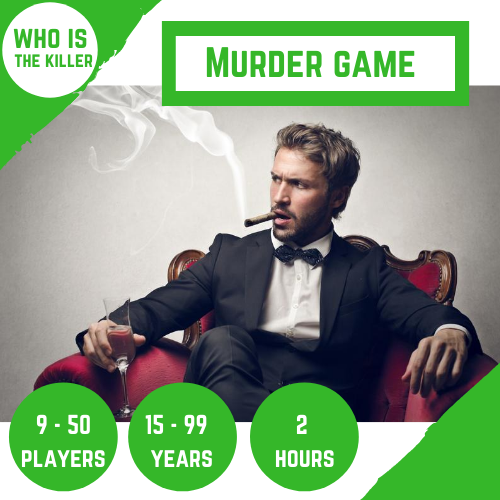 How do you play this murder game?

The murder game actually starts at the moment that you, as the (participating) game leader, distribute the roles to all those present. Here it is important to know that there are 9 main roles. It is wise to give them to people who don't mind reading a text in front of everyone. The other roles are supporting roles. By the way, they all have a very special character, which also makes the game very cozy and often funny.

In addition to a description of their role, the protagonists also get text for two scenes. The game starts with a scene. The protagonists take place in a circle (e.g. at a table) and all the other roles go around them. In turn they read their text out loud, creating a story. Suddenly it becomes clear that there are several people who have a motive to kill Don Corleone.

After the scene everyone talks to each other in the so-called interrogation phase in order to find all the pieces of the puzzle together and solve the murder in this murder game. All roles have information that they either have to tell pro-actively or only.... if they're asked.

Then there is a second scene in which it appears that some additional information has become known about the cause of death, for example. Also in this scene tensions are running high again.

Again there is an interrogation round, in which it is important to get the evidence conclusive in order to identify the killer. After this round everyone present has to point out their 'killer'.

After that, the detective will read out the evidence and it will become clear which of your group is a real detective.

Tips for this murder game

It is fun to send the roles to the participants before they play. They can then dress for their role and take any attributes with them. And they can then empathize extra well with their role.

The game leader can play along as well. If you print out the evidence in advance, but don't read through it in advance, you can (in the role of detective and game leader) join in the search for the killer.

What do I get with this murder game?

When you order this game, you will receive the script by e-mail. It describes the short explanation for you as game leader, the main and supporting roles, the 2 scenes, an overview of all roles and of course the proof.

Murder at the Mafia - The Story

Don Corleone, the largest Mafia boss in Italy, celebrates his birthday every year. All mafia families are invited and not coming is not an option. Actually everyone hates this bad man, even his own family members.

The party was in full swing and suddenly there was the news that Don Corleone died. But ... at a murder game, of course, it hasn't been a normal death. He was murdered. Maybe it was one of the other mafia leaders who dared? Don Salami or Don Alfredo maybe? Or was it one of the women at the party? Gigi, Paola or Sophia.

Or... no... he wouldn't..... His own bodyguard Massimo. But even Don Corleone's Consigliere (the right hand) can't be trusted.

Luckily, there are plenty of people out there who've been involved in criminal activity before. No doubt they can help the detective present solve this brutal murder. Who in your group could play a real Don ? And who gets the role of Don Corleone's wife ?

Here are the most frequently asked questions about our murder game. If you can't find the answer: we are almost always available (including weekends). Ask your question via Whatsapp: +31683777853 or via e-mail: [email protected] We are happy to help you :-).

What's the cost of this murder game?

The price of this Murder game is shown above the 'Ad to Cart button' on this page. You can order in your own currency.

What do I get when I order a murder game?

You will receive a document in your mailbox. It contains the entire game. The explanations for you as (playing along) game leader, the main roles, supporting roles, the scenes and of course the proof. A complete game which you only have to print out.

How many players can you play the murder game with?

You can play this game with a minimum of 9 people and a maximum of 50 people.There are 9 leading roles and the rest are supporting roles. For example, if you have a group of 30 people, then you choose 21 supporting roles. You can choose which one.

Does it matter what country we live in?

It doesn't matter what country you live in. The game is made for all English-speaking countries.

How do we play the murder game?

Everyone gets a role with a character. Each role gets some information, which has to be shared proactively with your conversation partner. But sometimes you only have to share the information when asked to do so.

A murder has been committed and then all players have to find out who did it and why. In the game, the clues are hidden. There are two scenes where certain roles also have text (this is all described and explained in the script. The players receive this text and can read it out loud). And after those scenes it's time to interrogate each other in order to find the necessary proof of who did it and why. The killer him/herself also plays along and doesn't know that he/she is the killer.

Do people have to dress up for this game?

You can, but you don't have to. Murder at the Mafia takes place at a big birthday party of the big Mafia boss, Don Corleone. Of course, it's nice when everyone's dressed festively, but it's not necessarily necessary. Some characters are very suitable to have nice attributes with thembut it is not necessary.

How soon will I receive the murder game after ordering?

You will receive the murder game in your mailbox within 10 minutes.

Do I have to hand out the roles a long time in advance?

No, of course it's nice to give players their roles a few days in advance, so that they can prepare themselves a bit (possibly dress up, which is not mandatory). But you can also give everyone the role the moment you start playing. They will then have 10 minutes to read through their role and then you can play.

From what age can you play the murder game?

The game is written for adults, but children from about 11 years of age play along fine. Then it is wise to help them a little.

Can this game be played during dinner ?

How long does the murder game last?

The game takes about 1.5 to 2 hours. But with a large group you can also play it in 2.5 hours. And with a small group in just over an hour. As a game leader, you can determine how long the interrogation rounds last. This way you can influence the total playing time.

Do you need extra space to play the game?

No. If your space is big enough for the group you're going to play with, then it's fine for the murder game, as well. It's necessary that people can go to each other to interrogate each other.

Do we need a game leader on the murder game?

You can play the game with 1 game leader, more are not really necessary. And what's more, the leader can also just play along. Often the leader has the role of the detective. 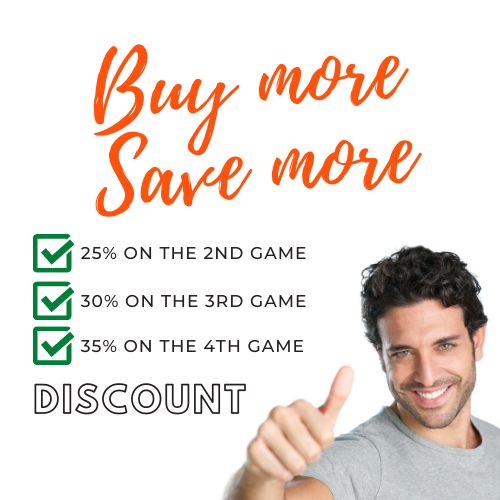 You will get a discount on every 2nd, 3rd and 4th game.