The envelope game – which team is the best in the 40 tasks?

A dice, 2 or more teams and 40 surprising questions, assignments and small games on a wide range of subjects make up the Envelopes board game, ensuring excitement and fun. A board game for adults for an afternoon or evening of entertainment. 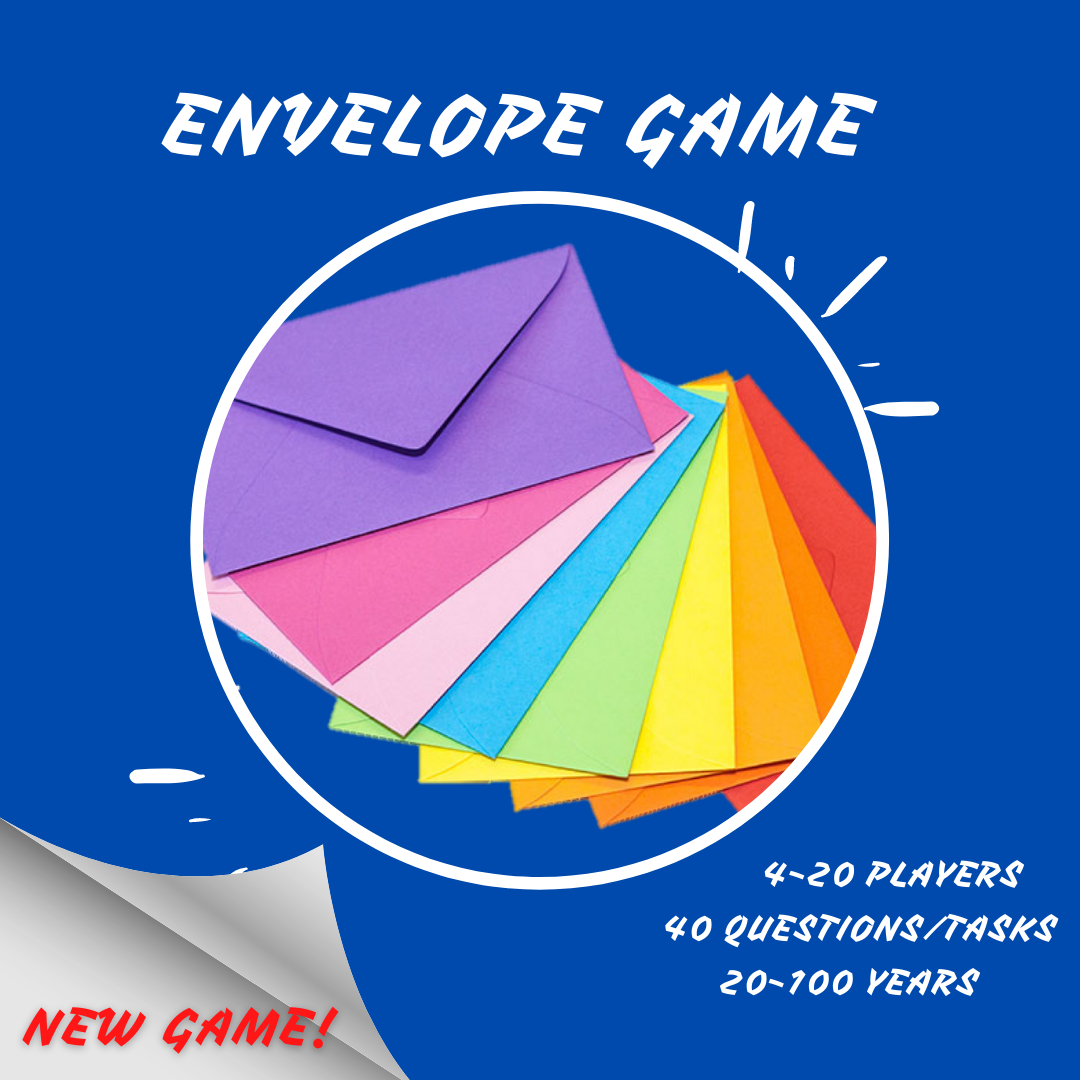 All players are divided into teams that play against each other. There are fun assignments for all players, because the subjects are very varied. This way, all knowledge and skill within the team can be used to beat the other teams.

How do you play the Envelope Game?

There are 40 envelopes hanging on a line (but if you prefer, you can also put them in a big bowl).The question is: what is inside those 40 envelopes? Your friends, family and colleagues can't wait to open them. A draw is made to determine which team begins. This team is the first to pick a random envelope from the line and play the task that is in that envelope.

Before the task is played, the throw of a dice determines how many points can be scored for the question/task in question.

Sometimes the team in this party game plays the assignment alone, but sometimes it is a duel against another team of your choice. There are also tasks and questions where suddenly all teams are allowed to participate.

Since there are 40 tasks and/or questions, each team gets 10 questions/tasks to play if there are for example 4 teams. There are also small, short games in this party game. And also some puzzles that you have to solve with your team. To give you an idea of the kind of questions and tasks, you can see a few example tasks below.

Some of the other topics you can expect to see are:

Excitement until the end of the game

The Envelope Game is designed to be exciting right to the end, because there is always a team that can gain points from a task if the task is not completed correctly by the team that played the task. So when you have to choose another team, who could possibly win points by playing against you, do you choose the team that is on top? Hell, no. And so each team has a chance to win the game until the end.

So one moment you are the champions of the evening and the next you and your team are at the bottom of the table again.

Who knows the most and/or plays the smartest?

This is a party game that is not only about ready knowledge, but also about puzzle skills and tactical game insight. Easy to play and very simple to prepare. Even the family member or friend who doesn't like games will turn into the most fanatical player!

With the envelope game, you as the game master choose a ready-made game that you can play yourself and that requires little or no preparation.

So it is very easy!

Choice of playing digitally or with envelopes

The Envelope Game is available in two different versions for the game master.

You can decide whether you want to print the questions and tasks and put them in envelopes (or fold them up) or play the game digitally. For the latter, you will of course need to bring a tablet, laptop or similar device.

For this envelope game, you have most of the necessary items at home, e.g. a packet of cards, dice, pen and paper. The best way to play this game is to print out the tasks and put them in an envelope. You attach these envelopes to a clothesline, for example. The teams themselves choose which envelope they want to play with.

What do you get with this group game?

When you order the Envelope Game, you will receive a digital version of the scenario with a clear explanation for the game master and the players and the 40 questions/tasks with the answers.

Can you solve this example of a question from envelope parlour games?

Did you recognise all the logos? The correct answers.

With how many people can you play the envelope game?

The envelope game can be played between 4 and 25 people. The most fun is, for example, to make three or four teams.

What materials do you need for this game?

You have most of the things you need for this envelope game at home. You need for instance a pack of cards, dice, pen and paper. The tasks can be put in envelopes, which you can hang on a line.

Are the tasks in this Envelope Game suitable for people who are less physical?

This game is played sitting down, at a table.

Do you have the Envelope Game in other languages as well?

We also have the envelope game in Danish, Dutch and German. It will soon be available in Spanish, Italian, Swedish, French and Norwegian.

For which ages is the Envelope Game suitable?

The envelope game is suitable for ages between (approximately) 20 and 100 years.

Is the price per player or a total price for the game?

The price is a total price.

Will I receive envelopes with this game?

No, you receive the game by e-mail. You print the materials and then put them in envelopes. If you don't have any, you can also fold up the tasks and put them in a large bowl.